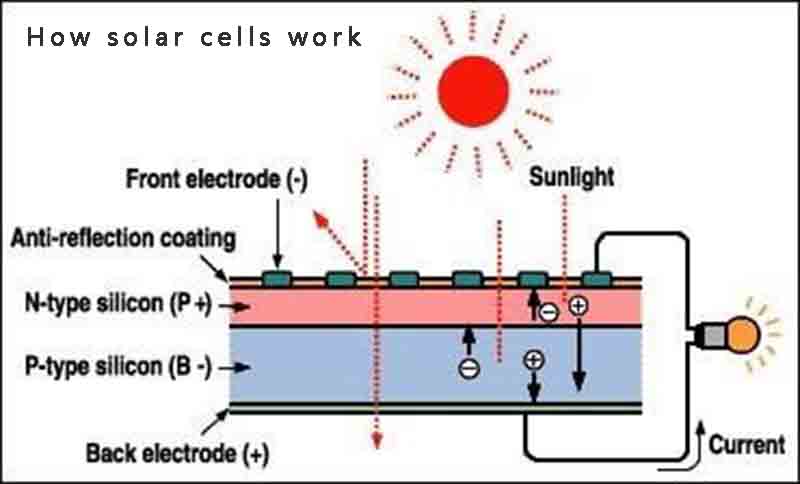 There are 4 electrons in the outermost electron shell of a silicon atom, as shown in Figure 1. The outer electrons of each atom have fixed positions and are bound by the nucleus. Under the excitation of external energy, such as solar radiation, they will get rid of the shackles of the nucleus and become free electrons, and at the same time leave a vacancy in its original place, that is, a hole. Since electrons are negatively charged, holes appear positively charged. In a pure silicon crystal, there are equal numbers of free electrons and holes. If an impurity element such as boron, aluminum, alloy or steel that can capture electrons is doped into the silicon crystal, a hole-type semiconductor is formed, which is referred to as a P-type semiconductor.

Part of the photo-generated electric field offsets the potential barrier electric field, and the rest makes the P-type region positively charged and the N-type region negatively charged; thus, the electromotive force is generated in the thin layer between the N-type region and the P-type region, that is, the photovoltaic electromotive force. . When the external circuit is turned on, there is power output. This is the basic principle of PN junction contact type single crystal silicon solar cell power generation. If dozens or hundreds of solar cells are connected in series or in parallel to form a solar cell module, the output can be obtained under the irradiation of sunlight. A considerable amount of power. In order to facilitate the reader’s understanding, here is a brief introduction to several semiconductor physics terms involved.

(3) Hole
Holes are a type of carrier in semiconductors. It has the same charge as the electron, but the opposite polarity. The energy band that is completely occupied by electrons in the crystal is called the full band or valence band, the energy band that is not occupied by electrons is called the empty band or conduction band, and the gap between the conduction band and the valence band is called the energy gap or forbidden band. If the electrons in the valence band gain energy due to external effects (such as heat, light, etc.) and jump to the conduction band with higher energy, there will be a very interesting effect: after the electron leaves, it will stay in the valence band. next vacancy. According to the principle of electric neutrality, this vacancy should be positively charged, and its charge is equal to that of electrons. When electrons near the hole move to fill the vacancy, it is equivalent to the vacancy moving in the opposite direction. Its function is very similar to the motion of positively charged particles, which is usually called positive hole, or hole for short. Therefore, under the action of the external electric field, the conduction in the semiconductor is not only generated by the movement of electrons, but also includes the movement of holes.

(4) Donor
Any impurity doped into a pure semiconductor whose function is to provide conductive electrons is called a donor impurity, abbreviated as a donor. Yes, silicon, if doped with elements such as phosphorus, arsenic, brocade, etc., their role is the donor.

(5) Recipient
Any impurity doped into a pure semiconductor whose function is to accept electrons or provide holes is called an acceptor impurity, or acceptor for short. For silicon, such as doped boron, nickel, aluminum and other elements, the role they play is the acceptor.

The working principle of monocrystalline silicon solar cells will be further explained below, and of course, polycrystalline silicon solar cells will also be briefly involved. As shown in Figure 3, taking the surface solar spectrum as an example, the solar spectrum ranges from ultraviolet to infrared, and its wavelengths are very wide. However, with the change of the absorption layers such as ozone, water vapor, and carbon dioxide, the continuous spectrum of blackbody radiation at about 5700K gradually becomes an overlapping type.
The solar spectrum is influenced by the atmosphere and can be represented by the atmospheric mass m. The m here is defined as in Figure 1-4 in Chapter 1, that is, m=0 means that in the universe, m=1 is equivalent to the vertical incidence of sunlight to the surface. Generally, when the angle of incidence of sunlight to the surface is a, Then m=secas. The solid line in Figure 3 represents the spectrum for an atmospheric mass of 2.

The solar spectrum is shown in Figure 3. When a solar cell absorbs the solar spectrum, electron-hole pairs (excess carriers) are generated, which are extracted from the outside to generate electricity. For solar cell materials, its light absorption spectrum can be used to represent its main characteristics. . Figure 4 shows the light absorption spectrum a() of single crystal silicon. Silicon is an indirect migration semiconductor. Electrons are excited from the valence band to the conduction band through light absorption, and the generated electron-hole pairs have phonons (acoustic The ion is the quantum of crystal lattice vibration energy), so the light absorption coefficient is small, and the absorption spectrum rises steadily. Due to the small light absorption coefficient, in order to obtain a larger photocurrent, the thickness of the solar cell silicon wafer that fully absorbs the incident light must reach 200 μm. However, if the light trapping technology is used, even the thickness of the silicon wafer is as thin as 50 μm. When the light of the general wavelength of the photocurrent is incident on the semiconductor, the formula of the carrier generation rate G(λ, x) from the incident surface to the depth is:

Here, for simplicity, it is assumed that a (λ) does not change in the depth direction of the material, and the absorption of free carriers is not considered. Of course, it is ideal if all the excess carriers generated by light absorption can be extracted from the outside of the solar cell, but During the actual recombination process, excess carriers are lost. For example, in a P-type semiconductor bulk, the carrier recombination rate R is affected by the change of the thermal equilibrium state of the number of carriers. If the 3rd order term is considered, the following formula can be obtained:

It can be seen from formula (5-9) that when the excess carrier concentration Δn is larger, the square of the reciprocal of Δn becomes smaller (τAug becomes smaller). For example, when the solar cell works under concentrated light, the effect of Auger recombination is greater.

where Us is the recombination rate between surface or interface defects, and Δns is the excess carrier concentration at the surface or interface. The solar cell is composed of diodes, so in the dark state (no light state), the current-voltage (I-V) characteristic will change as shown in Figure 5-7(a). On the contrary, in the light state, due to the reverse flow of the photo-generated current, the curve change in Fig. 5-7(b) will appear. However, when describing the performance of a solar cell, generally, as shown in Figure 5-8, the curve in the Nth quadrant of Figure 5-7 can be drawn in the first quadrant. The expression for this curve is: (9.10)

Here, a steady state is assumed in terms of the continuous equation. In the above formula, is the depth from the light incident surface; Jn, Jp are the electron current density and hole current density; n, p are the concentrations of electrons and holes; μn. μp are electron mobility and hole mobility; Dn , Dp, are the diffusion constants of electrons and holes; E is the electric field distribution; are the donor and acceptor concentrations after ionization; are the dielectric constant and vacuum dielectric constant of the material under consideration.

First, the photocurrent density generated by the P layer (base) is calculated. This layer can ignore the electric field. Therefore, the minority carriers (electrons) generated by light irradiation move due to diffusion and reach the end of the space charge layer as an inflow into the N layer. external current taken out. That is, equation (5-15) only needs to consider the diffusion current component. Regarding the minority carrier, that is, the excess concentration of electrons Δn, the following differential equation can be established by formula (5-15) and formula (5-18):

In this case, the photogenerated minority carriers (electrons) of the N (emission) layer will also move due to diffusion, and then recombine after reaching the surface. Due to the influence of the electric field, the end of the space charge layer (x-xj) is assumed to be quickly swept out. P layer. In the space charge layer, if the photogenerated excess minority carriers are affected by the electric field and are quickly swept out without recombination, the photocurrent density generated by this layer is: )

By substituting equations (5-25) to (5-27) into equations (5-20), the total photocurrent density JL can be calculated. As defined at the beginning of this section, the photocurrent density JL of the solar cell in the short-circuit state is the short-circuit current density JSC per unit area. Figure 5-10 shows the calculation example of the short-circuit current density JSC. It can be seen from this that the minority carriers in the base layer, that is, the diffusion length of electrons Ln, and the recombination velocity Sn on the back side have a great influence on the JSC. If the electron lifetime is shortened and Ln becomes less than half the thickness of the base layer (assumed to be), the JSC decreases rapidly, and the JSC at this time is not affected by the surface recombination velocity Sn. On the other hand, if Ln is thicker than the base layer, the JSC is not affected by Ln, but only by Sn.

Let’s discuss the open circuit voltage Voc again. If the ideal solar cell circuit does not consider the influence of series and parallel resistance, according to formula (5-11), the formula of Voc is obtained as:

It can be seen from the formula (5-28) that the photogenerated current IL increases, and the Voc also increases. To increase Voc, it is necessary to reduce the reverse saturation current I0. When the two terminals are infinitely far away, the diode area is regarded as A, the diffusion coefficients of electrons and holes are Dn and Dp respectively, and the diffusion lengths are Ln and Lp respectively. and the donor concentration are respectively, then the formula of I0 is obtained:

It can be known from this that, in order to reduce I0, to lengthen the diffusion length of electrons or holes, the concentrations of the N layer and the P layer must also be increased. Of course, when the concentration is increased, even if the diffusion length becomes very short, the reverse saturation current I0 does not decrease. That is, to improve Voc, it is necessary to improve the crystal quality as much as possible and reduce the concentration of complex energy levels. In addition, if the intrinsic carrier concentration ni in equation (5-29) is reduced, the reverse saturation current will also decrease, but the value of ni is determined by the material (gap width and effective mass), as long as the material remains unchanged, ni value will not change. However, it should be noted that if the concentration of the P layer or the N layer is too high, the forbidden band width will become smaller due to the influence of lattice deformation, ni increases, and Voc decreases.

Finally, the fill factor FF is discussed. From past experience, it is known that FF has the following effects on Voc. (18)

It is defined here as, that is, the normalized open circuit voltage. As Voc increases, FF also increases. As mentioned above, decreasing the recombination level concentration of bulk crystals and surfaces and interfaces and increasing Voc are related to increasing FF. When Voc is constant, if the diode factor n is increased, the FF will decrease. In addition, FF is also affected by the series resistance and parallel resistance of the battery