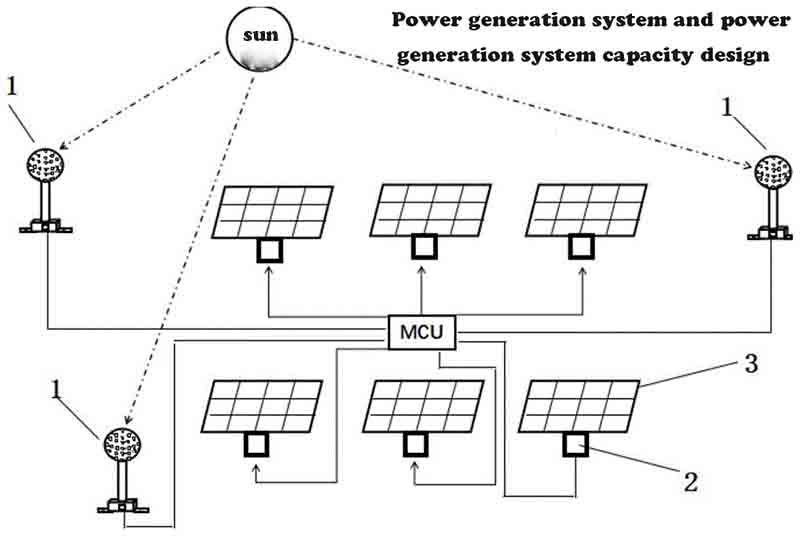 2.1. Computational load
Load estimation is one of the key factors in the design and pricing of stand-alone PV systems. All loads are usually listed with their names, power requirements, rated operating voltage, and hours of use per day. Both AC and DC loads are listed the same, the power factor is not considered in the AC power calculation. The loads are then classified and grouped by operating voltage to calculate the total power requirement for each group. Next, select the operating voltage of the system, and calculate the average ampere hour (A h) required by the entire system under this voltage, that is, the sum of the average daily power consumption of all loads.

Regarding the selection of the system operating voltage, the voltage required by the maximum power load is often selected. In systems with AC loads as the mainstay, the DC system voltage should be compatible with the selected inverter input voltage. Usually, for an independent solar photovoltaic power generation system, the AC load works at 220V, and the DC load works at 12V or a multiple of 12V, that is, 24V or 48V, etc. In theory, the load is straight forward, but in practice the requirements of the load are often uncertain. For example, the power required by household appliances can be known from the manufacturer’s information, but the working hours are not known. The daily, weekly and monthly usage time is likely to be overestimated, and the cumulative effect will lead to photovoltaic The design capacity and cost of power generation systems have risen.

In fact, some higher power loads can be scheduled to be used at different times. In the strict design, we must master the load characteristics of the independent photovoltaic power generation system, that is, the load power at different times in 24 hours a day, especially for the centralized power supply system, after understanding the electricity consumption law, it can be controlled in a timely manner. Figure 1 shows the load characteristics of a 50kW photovoltaic power station in a certain place. In the figure, FL, IL, TV, D, and H represent fluorescent lamps, incandescent lamps, televisions, sterilizers and heaters, respectively.

2.2. Calculation of incident energy of solar panels
When designing and installing photovoltaic power generation systems, it is of course necessary to grasp the local solar energy resources. The basic data required for the design calculation are as follows.

These data generally cannot make long-term predictions, and can only be based on averages observed over the past ten to twenty years. However, few independent photovoltaic power generation systems are built in cities with complete solar radiation data, and the solar radiation data in remote areas may not be similar to those in nearby cities. Therefore, when we can only use the meteorological data of neighboring cities or the data recorded by meteorological observation stations in similar regions to make analogies, we should grasp the factors of possible deviation. Need to know that estimates of solar energy resources directly affect the performance and cost of stand-alone PV systems.

The first term on the right side of the formula is the direct component, the second term is the scattered component, and the third term is the ground reflection component. ρ is the ground reflectivity, and the reflectivity of different ground states can be found in the relevant books. In engineering calculation, take the average value of ρ as 0.2, and take 0.7 when snow covers the ground. The relationship of each angle in the formula is shown in Fig. 2.

If computer-aided design software is used, the optimal design of the inclination angle of the square array should be carried out in advance, and the total radiation amount throughout the year should be as large as possible, and the difference in radiation amount in winter and summer should be as small as possible. This is especially important in high latitudes. This is because the magnitude of the sun on the horizontal surface differs greatly between winter and summer at high latitudes. Only by considering the trade-off and choosing the best inclination angle, the difference between the winter and summer radiation on the solar cell square will be reduced, the battery capacity design can be reduced, the system cost will be reduced, and the design will be more reasonable. Generally speaking, the radiation on the square array of fixed-tilt solar cells is 5% to 15% higher than that on the horizontal plane. In the design of a small independent photovoltaic power generation system, for the determination of the inclination angle and azimuth angle of the fixed square array, the author of this book recommends that the azimuth angle should be set due to the south for China in the northern hemisphere. However, due to certain restrictions, it cannot be due south, as long as it is within 20° of due south, the output power of the phalanx will not decrease much. A setting other than due south reduces power output roughly as a cosine function. As for the inclination of the square matrix, it is generally set as a fixed integer according to the local latitude. If it is considered that more electricity can be generated in winter, the inclination of the phalanx can be appropriately larger than the local latitude, generally within +5°~15°.

2.3. Determination of battery capacity
To operate a photovoltaic power generation system independently, it is generally necessary to configure a battery pack as an energy storage device. The function of the battery is to store the excess electrical energy generated by the solar cell array when it is sunny for use by the load at night or in cloudy and rainy days. The capacity of a battery refers to its ability to store electricity, which is usually measured by the amount of electricity released by the battery when it is discharged to the final voltage. The use capacity of lead-acid batteries is the amount of electricity released under certain working conditions, and its use capacity is related to the manufacturer’s manufacturing quality and battery working conditions. To determine the optimal value of the battery capacity of an independent photovoltaic system, the power generation of the solar cell array, the load capacity and the efficiency of the DC-AC conversion device (inverter) must be comprehensively considered. There are many ways to calculate the battery capacity, generally it can be calculated by the following formula.

This is a simple formula for calculating the battery capacity from the average load capacity and the longest continuous no-sunshine time (electricity usage time). It should be noted that it is appropriate to take as long as there is no sunshine. If it is too long, the calculated battery capacity will be very large, and the investment will be increased unnecessarily. Moreover, if the capacity of the battery increases, the capacity of the solar battery must be increased correspondingly to match the two capacities; otherwise, the relative charging rate of the battery will decrease, and the battery will always be fully charged, which will also affect the service life. Therefore, it is not appropriate to estimate the non-sunshine time for too long and think it is safe. Generally speaking, it is more appropriate to take the battery output that is 3 times the output of the solar cell.

(2) Determine the optimal current of the square matrix
The minimum current that the square array should output is subtracted from the two. If ΔQ=Q, a negative Q is positive, which means that the power generation of the square array in this month is greater than the electricity consumption, and the battery can be charged; The power output of the array is less than the power consumption, and it needs to be supplemented by the energy stored in the battery, and the battery is in a state of loss.

(3) Determine the working voltage of the square matrix
The operating voltage output of the phalanx should be large enough to effectively charge the battery throughout the year. Therefore, the operating voltage of the square array in any season must meet the performance parameters of the battery and solar cell components, and the appropriate model and specification can be selected. The number of series and parallel components formed by the square matrix can also be easily determined.

When purchasing a solar cell module, if it is used to form a square matrix in series or parallel in a certain way, the designer and user should propose to the manufacturer in advance that the I-V characteristic curve of each module should be in good agreement. In order to prevent the combination efficiency of the square matrix from being too low, the combination efficiency should generally be required to be greater than 97%.