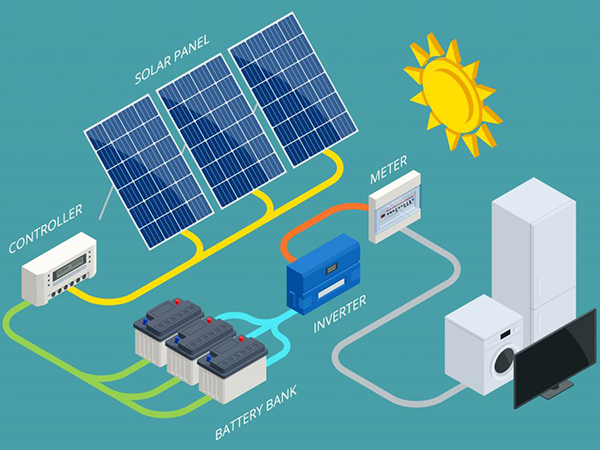 As a renewable energy source, photovoltaic power generation has received wide attention and is considered to be a more promising “green” energy.

It is because it focuses on solving environmental problems on the earth. The indicators for judging renewable energy are the acceptable cost and the potential for reducing greenhouse gas emissions. The former is no longer controversial, and photovoltaic power generation in many developed countries in the world has achieved parity on the grid. Here we must first introduce the concept of energy payback period, and then clarify its potential to reduce CO2.

Photovoltaic power generation systems, including solar cell components and system balancing components, also consume energy during the manufacturing process and also generate greenhouse gases. And this part of the energy is recovered by its own power generation. The time required for its recovery is called Energy Payback Time (EPT). Assuming that the energy produced by a device each year is multiplied by its life cycle, the energy that the device can produce during its life is obtained. If the energy is less than the energy consumption of the device, the device cannot be used as an energy source.

The EPT of a photovoltaic system depends on a series of complex factors. The input energy is related to many factors, such as the type of solar cell (monocrystalline silicon, polycrystalline silicon, amorphous silicon or other thin film batteries, etc.), process, packaging materials and methods, etc., the frame and support structure of the square matrix, and the system balance components ( BOS) materials and manufacturing processes. If the system is equipped with an energy storage device, batteries must be considered. In addition, the energy consumed by installation, operation, dismantling and waste disposal after the end of the life span must also be considered.

The energy output of the photovoltaic system is also related to many factors, such as whether the system design is optimized, whether the equipment configuration is reasonable, whether the construction and installation are improper, whether the operation and maintenance are in place, the service life and performance and efficiency of the solar cell components and supporting components, local Geographical and meteorological conditions, etc. In addition, there are some indirect factors that are not related to the power generation system itself.

Although the factors affecting EPT are complex, theoretical research and practical investigation can still be used to sort out the main factors and conduct a comprehensive analysis. Since the 1990s, many European and American scholars have made relevant detailed research and analysis.

It is worth mentioning that Alsea fA of Utrecht University in the Netherlands is one of the most famous researchers in the field of photovoltaic power generation benefits. In the Energy Payback of Photovoltaic Energy Systems: Present Status Pros pects paper published in July 1998, he analyzed and compared More than ten articles published in many countries that are recognized as reasonable, pointed out that some documents have different energy requirements for manufacturing components. Polysilicon is 2400~7600MJ/m2, and monocrystalline silicon is 5300~16500MJ/m2. Part of the reason is the parameters of the production process. Different, such as the influence of silicon wafer thickness and slicing loss. Alsea has established a “best estimate” method for the energy required for polycrystalline silicon, monocrystalline silicon, thin-film battery modules and supporting components. In 2000, he analyzed different types of components and proposed that after polysilicon cells and thin-film cells contain aluminum frame, support structure and inverters, the energy payback time of the system is 3.2 years and 2.7 years, respectively. The life of solar cells is estimated to be 25-30 years, so the energy repayment time of these components is only 1/10 of the life. Alsea estimated at that time that due to technological progress, it could be reduced to one to two years by 2010 and it has been realized in China. It will be lower by 2020.

Since 2009, the Chinese government has paid more attention to the domestic application of photovoltaic energy, formulated a series of policies and measures, and grid-connected photovoltaic power generation systems have developed rapidly, especially the distributed grid-connected photovoltaic power generation systems on the roof of buildings using polysilicon modules have become very common. . The issue of energy payback period in this area has attracted people’s attention, so here is a special mention of the International Energy Agency (IEA-PVPS) joint report.

The International Energy Agency (IEA-PVPS), the European Photovoltaic Technology Forum (EPTP) and the European Photovoltaic Industry Association (EPIA) jointly published a report in May 2006, Comparative Assessment of Selected Environmental Indicators of Photovoltaic Electri-city in OECD Cities, based on the world Investigate existing research on the energy input of photovoltaic systems within the scope. The report provides that the energy repayment time of all photovoltaic systems (not only components, but also supporting components, connecting cables and electronic devices, etc.) depends on the local solar radiation situation. 41 major cities in 26 OECD countries have carried out analysis and calculations, enumerating in detail the annual photovoltaic unit power generation, energy recovery factor and photovoltaic unit power of these cities, which is equivalent to reducing CO2 emissions each year. The conclusion is that the energy recovery time for grid-connected photovoltaic systems installed on the roof is 1.6 to 3.3 years, and for vertical installation towards the equator, it is 2.7 to 4.7 years.

Gaiddon B. et al. subsequently published an article Environmental Benefits of PV Systems in OECD Cities on the basis and methods of the analysis, pointing out that the above conclusions are mainly for the grid-connected photovoltaic systems in cities that use standard polysilicon modules and inverters.

(1) Facing the equator, install the grid-connected photovoltaic system on the roof with an inclination of 30° in the square array.

(2) The photovoltaic array is installed vertically towards the equator, that is, the inclination angle is 90°, such as being used as a curtain wall.

Finally, calculate the energy repayment time range of grid-connected photovoltaic systems in 41 cities, as shown in Figure 1-1(b).

During the production process, different types of solar cell modules consume different electric energy per unit power, and different processes and production scales also have an impact. For the polysilicon grid-connected photovoltaic system, the average unit power consumption is shown in Table 24, that is, the electricity consumed by the polysilicon grid-connected photovoltaic system per kilowatt is 2525kW·h.

In order to evaluate the environmental benefits of grid-connected photovoltaic systems, for 28 major cities in China, Professor Yang Jinhuan and others have analyzed and calculated according to the above technical indicators. Among them, the solar radiation on the local horizontal surface is averaged based on the measurement data of the 1981-2000 China Meteorological Radiation Data Yearbook published by the National Meteorological Center, and calculated according to the calculation method proposed by Klein.SA and Theilacker.IC. The monthly average solar irradiance is compared to obtain the maximum solar irradiance H1 that can be received throughout the year. The corresponding inclination angle is used as the optimal inclination angle of the grid-connected photovoltaic array. It can also be determined when the array is installed vertically toward the equator. Based on the amount of solar radiation received throughout the year, the energy recovery time of grid-connected photovoltaic systems in some cities in China is derived.

In some major cities in China, Lhasa has the shortest energy recovery time for the grid-connected photovoltaic systems installed at the best inclination angle and installed vertically toward the equator, which are only 1.57 years and 2.50 years respectively. The calculation does not include the external input energy required for transportation, installation, operation and the end of the final life cycle, dismantling the system and processing waste. According to analysis, the unit power (W) of these energy allocated to solar cells has little effect on energy recovery. Of course, for monocrystalline silicon batteries, the energy repayment time is slightly increased, while for thin-film batteries, it is reduced.

When fossil fuels are burned, greenhouse gases are emitted, which usually contain CO2, SO2,NOx and other components

The main greenhouse gas is CO2. In order to quantify, the reduction of CO2 emissions is usually used as a measure of the effect of reducing greenhouse gases.

The CO2 emission index is mainly related to the fuel used by the power plant. Different fuels emit different amounts of CO2 when burned. For clean energy such as hydropower, solar energy, wind energy, and geothermal energy, the CO2 emissions during power generation are zero; nuclear power generation emissions The amount is very small, and it can also be regarded as zero emissions; for other types of fuels, the amount of greenhouse gases produced is not the same. The amount of CO2 emitted by a certain fuel per unit of power generation is called the Greenhouse Gras Emission Factor, and the unit is tCO2/(MW·h).

For 28 major cities in China, referring to the technical conditions of the EA-PVPS joint report, the following amendments have also been made。